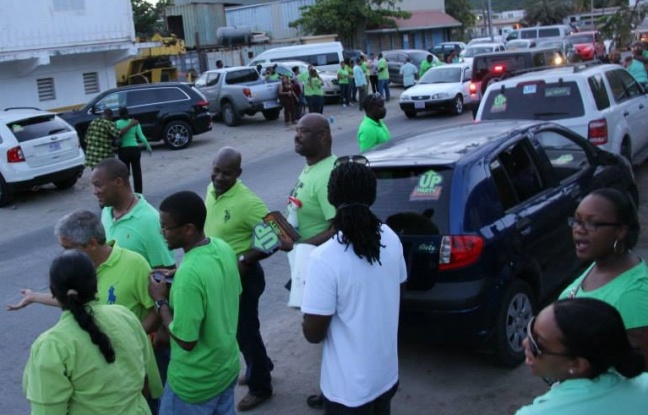 SUCKER GARDEN-PHILIPSBURG, Sint Maarten - The United People’s (UP) party has started a “Green Friday” tradition asking all those interested to wear the colour green every Friday.  On May 23rd the party also introduced “Drive UP” in the district of Sucker Garden and on the Pondfill.  Driver’s passing along the route could pull over and have their vehicle partly adorn with UP paraphernalia.  The UP Drive will be moving into the various voting districts in the coming weeks Soualiga Newsday has understood.

According to an UP party sympathizer who was on the scene at both locations, dozens of cars and trucks pulled to the side, and people were asking when they would be coming to their district.  “There is a green momentum building and the UP Party will be victorious on the night of August 29 sweeping more than eight seats,” the party supporter said.

The Electoral Council announced this week that political parties have until May 28 to register for the polls.

Postulation of candidates by political parties participating in the August 29 elections will officially take place on July 18.  Political parties will also have to present their party manifesto to the Electoral Council on that day.

Political parties will then move into full gear organizing various public district meetings to introduce their candidates to the people and address the issues and present their party’s solutions for the next four-year governing period.

This will be the nation’s second national elections since achieving the status of autonomous country within the Kingdom of the Netherlands on 10-10-10.