UNICEF/Romenzi Seated on a rug atop the dirt ground, two girls complete homework outside their tent home, in the Kawergosk camp for Syrian refugees, west of Erbil, Iraq.
INTERNATIONAL, 17 February 2020, Culture and Education - More than two years after the defeat of ISIL in Iraq, some children in areas formerly controlled by the terrorist group still cannot access school or get the necessary documentation required for enrollment, a UN report published on Monday finds.

The joint study by the UN Assistance Mission for Iraq (UNAMI) and the UN human rights office, OHCHR, is based on interviews and group consultations with 237 children, young people and teachers at six camps for displaced persons (IDPs) in Ninewa governorate and in the cities of Mosul and Erbil.

Some children in #Iraq are still unable to receive education in the aftermath of the territorial defeat of the Islamic State in Iraq and the Levant, saying they can't access schools or obtain key documentation necessary for enrolment. New report: https://www.ohchr.org/EN/NewsEvents/Pages/DisplayNews.aspx?NewsID=25563&LangID=E … @UNIraq 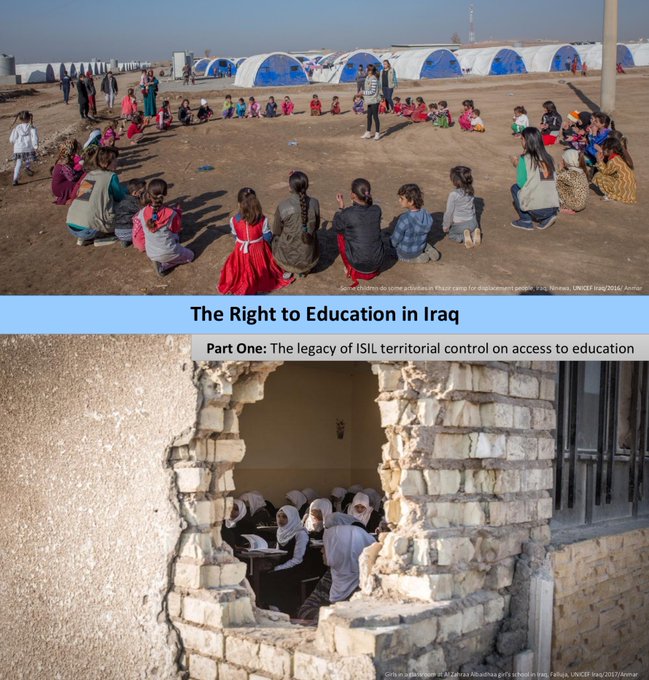 Several interviewees reported that restrictions on their movement  meant they could not move freely in and out of the camps, thus preventing them from attending school and other daily activities.

“Many children who were in school when living under ISIL control are now young adults, making them too old to attend mainstream schools and are left with no alternative options.

These challenges are creating a marginalized generation of children and young adults, many of whom are or will be entering adulthood without any post-primary schooling”, according to the report titled The Right to Education in Iraq: Part One - The legacy of ISIL territorial control on access to education.

As one boy told the authors: “There is no future in the camp anyway, what am I going to do here? Why do I need an education for this life? It has been so long since we were at school, our minds feel closed to learning, some of us can no longer even read and write. We have no support to overcome these things. Even if I could take the exams, I would not pass them. I don’t see a future for myself.”

The activities of ISIL, also known as Daesh, have been well-documented.

Since 2014, fighters carried out a campaign of violence, oppression and systematic human rights violations, leaving behind death, destruction and displacement.

Of the approximately 1.4 million people uprooted by the crisis, 658,000 are children, almost half of whom are not in school.

Although ISIL sustained military defeat in Iraq in 2017, some counter-insurgency operations continue. Additionally, families perceived as having affiliations with the group have had wider restrictions imposed on them.

UN High Commissioner for Human Rights Michelle Bachelet said the importance of the right to education for children and young people cannot be overstated.

“Inclusive, quality education is not just a right in itself but it is essential for the full realization of a range of other human rights. Education literally has the power to transform lives and make dreams come true”, she said.

IOM/Muse Mohammed
Mohammed, 10, sits on the staircase of the former house he used to hide with his family in Mosul.

Education can also protect young people when they are at a particularly vulnerable age, the authors added.

“Children and young adults who are unable to attend school are especially at risk, leaving them on the margins of society and open to radicalization or other criminal activity,” they said.

“The loss of childhood during the ISIL years, including the lack of educational opportunities and the limited access to mental health and psychosocial support, can result in cycles of violence, both in public and private sphere, that directly prevent youth from reaching their full potential.”

Recommendations for the future

The report concludes with recommendations for the Iraqi authorities.

While acknowledging Government efforts to ensure access to education, measures should be implemented to allow people to obtain civil documentation.

The Government should also provide accessible primary and secondary education to all Iraqis, including those in IDP camps.

Measures can include increasing the number of schools and teaching hours, and expanding alternative education programmes.  Teachers can also be trained in how to teach students who have suffered trauma.

The report was shared with the Government and integrates comments received from the Ministry of Education.