© UNICEF/Roger LeMoyne Boys reach through bars at a jail for juveniles in the Delmas neighbourhood of Port-au-Prince, Haiti. 2005
INTERNATIONAL, 25 March 2020, Human Rights - COVID-19 has begun to strike in prisons, jails and immigration detention centres, UN High Commissioner for Human Rights Michelle Bachelet warned on Wednesday, as she urged Governments “not to forget hose behind bars” and to protect those working in closed facilities in their overall efforts to contain the pandemic

“In many countries, detention facilities are overcrowded, in some cases dangerously so,” Ms. Bachelet said, making physical distancing and self-isolation practically impossible. People are often held in unhygienic conditions.

Health services are inadequate – or non-existent – and the virus “risks rampaging” through these vulnerable populations.

As Governments make tough decisions, she urged them not to forget those behind bars, or confined in such places as mental health facilities, nursing homes and orphanages. 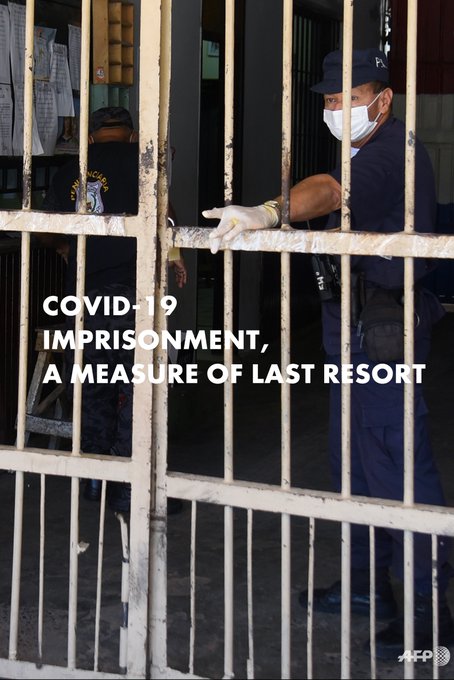 “The consequences of neglecting them are potentially catastrophic,” the High Commissioner said.

Governments must work quickly to reduce the number of people in detention, she said, noting that several countries have already taken positive actions.

She encouraged authorities to examine ways to release those particularly vulnerable to COVID-19 – older detainees and those who are sick, among them – as well as low-risk offenders. They should also continue to provide for the specific health-care requirements of women prisoners, inmates with disabilities and juvenile detainees.

“Now, more than ever, Governments should release every person detained without sufficient legal basis,” she said, including political prisoners and others detained simply for expressing critical or dissenting views. Upon release, people should be medically screened, with measures taken to ensure they receive care and follow-up, if needed.

She recalled that under international human rights law, States have an obligation to work to prevent foreseeable threats to public health and ensure that all who need vital medical care can receive it. The UN Standard Minimum Rules for the Treatment of Prisoners (also known as the ‘Nelson Mandela Rules’), meanwhile, set out measures to protect those in detention.

She likewise cautioned that any restrictions on visits to closed institutions should be introduced in a transparent way and communicated clearly, notably through expanded videoconferencing, allowing more phone calls with family members and permitting email.

And while it is vital to enforce physical distancing, she expressed deep concern that some countries are threatening to impose prison sentences for those who fail to obey – an action that is likely to exacerbate the grave situation in prisons and do little to halt the disease’s spread.

“Imprisonment should be a measure of last resort,” she said.

The UN Human Rights Office and the World Health Organization (WHO) are due this week to issue an interim guidance paper – COVID 19: Focus on persons deprived of their liberty – which will contain key messages and actions for UN agencies, governments and relevant authorities, national human rights institutions, and civil society.