UNDP Mauritius/Stéphane Bellero Coastal communities, like Port Sud-Est in Mauritius, are exposed to the adverse impacts of climate change.
INTERNATIONAL, 27 June 2020, Climate Change - As governments try to kick-start their economies, the UN is calling for recovery plans to be built around low-carbon technologies, to avoid a return to fossil fuel-based business as usual.

Islands at the forefront

Some of the countries and regions at the forefront of this wholescale shift to renewables are islands, where the need to avoid the significant cost of importing fossil fuels, such as oil and gas, provides added motivation.

Mauritius, for example, is planning to generate over a third of its electricity from renewable sources within the next five years. Projects supported by the UN Development Programme (UNDP), will be an important part of this transition, bringing an additional 25 Mega Watts of solar power to Mauritius, including a mini-power grid in Agalega, one of the outer islands.

At the current pace, it would take the world forever to come anywhere near a no-carbon system. Rana Adib, Executive Director, REN21

As well as reducing pollution, this shift to clean energy is expected to aid economic recovery, with new jobs in areas such as the production, installation, and maintenance of renewable energy equipment, from solar panels, to batteries and wind turbines.

Another added benefit is energy security: with such a high dependence on imported oil, price fluctuations can make budgeting difficult, and any interruption to supply can have serious consequences. “Home-grown” energy from renewable sources can make the energy grid more reliable, and more resilient.

The Pacific US State of Hawaii is planning to go even further and become a trailblazer for the rest of the United States, by going completely renewable by 2045. As Hawaii State Governor, David Ige, explained to UN News, their commitment is now moving to the mainstream: “at the time we enacted the law to commit to 100 per cent renewables, no other community had done anything similar and at the National Governors’ Association, people were generally very surprised.

They thought that it was so beyond possible that it was a foolish undertaking. Now, California has embraced the commitment to 100 per cent clean renewable energy and other states are contemplating doing the same. I’m proud that Hawaii has really inspired other states and communities.”

As economies recover post-pandemic, following these examples will be essential to turn the tide and, as a new report from REN21 – a renewable energy think tank that includes the UN Environment Programme (UNEP) and UN Development Programme (UNDP) amongst its members – shows, remarkable progress has been made by the renewable energy industry, where costs are falling, and clean energy use is increase. 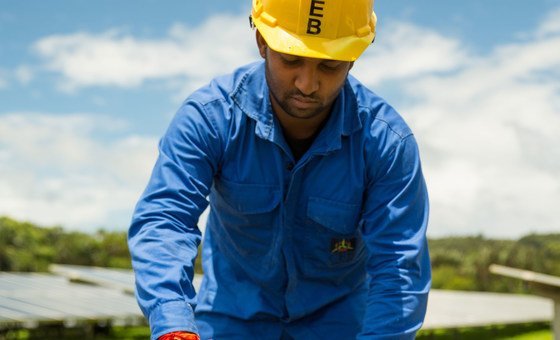 Jasvirsing Jeetul works as a photovoltaic technician, maintaining the panels at the solar power farm in Henrietta., by UNDP Mauritius/Stéphane Bellero

However, this good news is currently offset by the fact that global energy use is rising, and is being powered, in the main, by fossil fuels. Following the release of the report, on 16 June, Rana Adib, REN21’s Executive Director, underlined the fact that the pandemic-related emissions drop barely makes a dent in the long-term problem of climate change, and an overhaul of the entire energy system is needed:

“Even if the lockdowns were to continue for a decade, the change would not be sufficient. At the current pace, with the current system and current market rules, it would take the world forever to come anywhere near a no-carbon system.”

The report warns that many recovery programmes include commitments to stick with dirty, polluting fossil fuel systems: whilst some countries are phasing out coal, others continue to invest in new coal-fired power plants. In addition, funding from private banks for fossil fuel projects has increased each year since the signing of the 2015 Paris climate agreement, totalling some USD 2.7 trillion over the last three years.

“Some directly promote natural gas, coal or oil. Others, though claiming a green focus, build the roof and forget the foundation,” warned Ms. Adib. “Take electric cars and hydrogen, for example. These technologies are only green if powered by renewables.”

Nevertheless, Mauritius and Hawaii show that a green option is not only possible, but actually a better deal than a fossil-fuel based recovery plan, especially when the true costs, including air pollution, climate change effects and traffic congestion, are factored in.

A new book from the World Bank, Technology Transfer and Innovation for Low-carbon Development, shows that most of the emissions reductions needed to keep global warming to 1.5 degrees above pre-industrial levels, can be achieved if existing, commercially proven low-carbon technology is adopted on a massive scale. 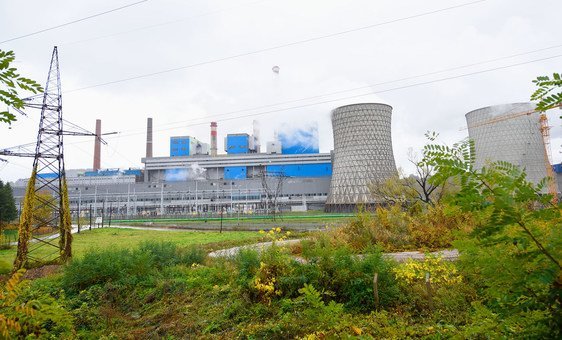 A coal power plant in Tuzla, Bosnia., by UNEP

As Inger Andersen, the Executive Director of the UN Environment Programme (UNEP) explains, “renewables are now more cost-effective than ever, providing an opportunity to prioritize clean economic recovery packages and bring the world closer to meeting the Paris Agreement Goals. Renewables are a key pillar of a healthy, safe and green COVID-19 recovery that leaves no one behind.”

When Global Trends in Renewable Energy Investment 2020, a report from UNEP, The Frankfurt School, and Bloomberg New Energy Finance, was released in June, it further underlined the plummeting costs of clean energy, highlighting the fact that “putting these dollars into renewables will buy more generation capacity than ever before”, and help countries deliver on stronger climate action.

“If governments take advantage of the ever-falling price tag of renewables to put clean energy at the heart of COVID -19 economic recovery, instead of subsidizing the recovery of fossil-fuel industries”, said Ms. Andersen, “they can take a big step towards clean energy and a healthy natural world, which ultimately is the best insurance policy against global pandemics.”

An opportunity for a cleaner world

The economic slowdown resulting from the COVID-19 pandemic has seen a significant fall in harmful greenhouse emissions and, according to the International Energy Agency (IEA), 2020 will see a drop of around eight per cent.

This has given us an idea of what a cleaner world might look like, but it is only a temporary respite: it has also had devastating consequences, including the shuttering of entire sectors, and unemployment for millions of people.

Now, with countries and regions like Mauritius and Hawaii investing in policies, programmes and initiatives to get people back to work, there is an opportunity for a more sustainable approach, with renewable technologies at its heart. The question is whether the international community will seize this opportunity, or stick with the devil they know.

Rate this item
(0 votes)
Tweet
More in this category: « FROM THE FIELD: ‘Major breakthrough’ in fight against diseases spread by mosquitos UN highlights urgent need to tackle impact of likely electric car battery production boom »
back to top