ILO/Apex Image A man prepares tea in a coffee shop in Kuwait.
INTERNATIONAL, 3 July 2020, Migrants and Refugees - In Kuwait, the UN has played an important role in countering xenophobic rhetoric, falsely blaming the spread of COVID-19 on migrant workers. In this opinion piece, Tarek El Sheikh, the United Nations Resident Coordinator in the country, highlights the efforts being made to safeguard the rights of foreign residents.

The increase in xenophobic language directed towards migrants – who make up more than 70 per cent of the population of Kuwait – prompted a group of jurists, the UN Office of the High Commissioner for Human Rights (OHCHR), and the Office of the Resident Coordinator, to launch a media campaign designed to help the authorities counter the problem, which they are beginning to see as a potential threat to a peaceful and stable society; we welcomed the Emir of Kuwait’s televised speech on the subject, in which he emphasized the need to heal divisions, and address misinformation.

This is one example of the role that the UN is playing in Kuwait, to address the consequences of the pandemic. Our response can be divided into four main areas. Firstly, we are helping to prepare the economy and society (for example, by strengthening supply chains, countering economic shocks and supporting small and medium-sized enterprises). Secondly, we are working to protect vulnerable groups, including migrant workers. Thirdly, we are creating educational content, via different media, and lastly, we are addressing developmental and health issues. 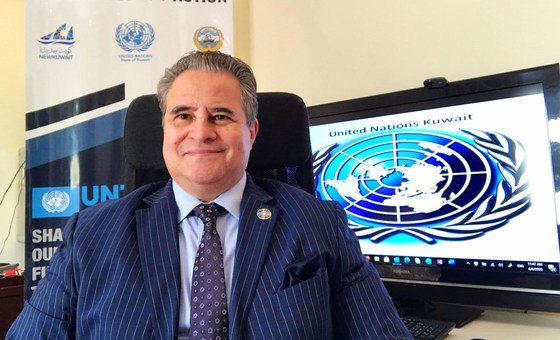 One of the big economic issues we are dealing with is unemployment. The vast majority of the migrant workers who travel to Kuwait have very limited means and, since the pandemic, many of them have found themselves without work.
Large sums of money have been collected to help migrant workers, a sign of the generosity of many Kuwaitis, who have also donated food to help those affected by the downturn. Various UN bodies, such as the International Organisation for Migration (IOM) and International Labour Organisation (ILO) have been cooperating with the Kuwaiti authorities to find ways to cope with this crisis.

We have developed guidelines and recommendations for dealing with migrants, and mitigating the socio-economic impacts of the pandemic, and we are pleased to say that many of these have been adopted by the authorities. The UN Development Programme and the World Bank have provided socio-economic advice to counter market instability.

Another consequence of the rise in unemployment, is that many migrant workers no longer have valid work permits, and face deportation to their countries of origin. The members of the UN Migration Network – comprised of IOM, ILO, and the United Nations Office on Drugs and Crime (UNODC), UN Women, OHCHR and the UN refugee agency (UNHCR) – are coordinating on this issue, to ensure that voluntary deportations take place in a manner that respects international human rights law.

The IOM and UNHCR have also been working with partners to provide food and personal protection equipment (PPE) to migrants and people of concern, and inspecting centres for voluntary deporting workers, and the victims of domestic violence (including domestic workers).

My message to the citizens of Kuwait, migrant workers living in the country, and everyone who is contributing to dealing with this pandemic, is that this is a time for solidarity, action, humanitarian support, and respect for human rights.

We cannot defeat this new enemy without unity, and agreement on a basic strategy, with the United Nations working hand in hand with government, the private sector, and civil society.

Let us reject hatred, turn to humanity, and respect for human rights, and reiterate what the UN Secretary-General has said: the only way to survive, is to work together.