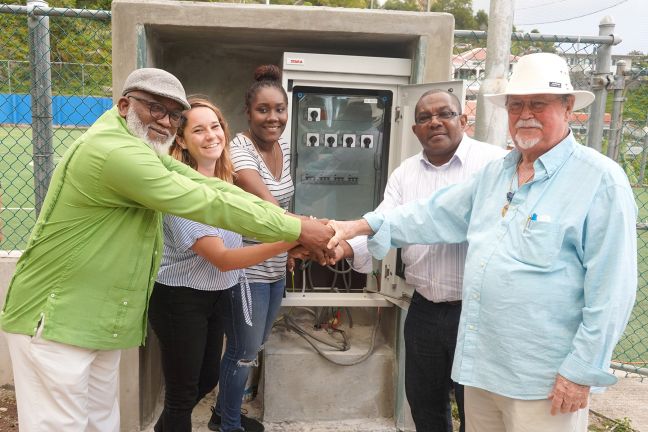 Turning on the lights at the Johan Cruyff Court in The Bottom. From left: Dave Levenstone, sports coordinators Lauren Risley and Joelyn Robinson, Commissioner Rolando Wilson and Will Johnson.

SABA (THE BOTTOM) - Two notable events took place to the advancement of sports on Saba on Friday, February 19 and Saturday, February 20 when the light masts at the Johan Cruyff Court were officially turned on and the upgraded Juliana Sports Field was inaugurated with a netball and basketball tournament.

On Friday afternoon, Commissioner Rolando Wilson, together with Will Johnson and Dave Levenstone of the Man-O-War Ground Foundation and sports coordinators Joelyn Robinson and Lauren Risley, switched on the lights at the Johan Cruyff Court. It was a special moment, not only because now people can practice sports in the evening hours, but because it did take a while for the light masts project to be completed.

When the Johan Cruyff Court was constructed more than 10 years ago, there was insufficient funding for light masts. This meant that many sports activities were shortened because of the lack of visibility after the sun had gone down. During his visit to Saba in June 2018, Commissioner Wilson took State Secretary of Public Health, Welfare and Sport Paul Blokhuis to the field. “I explained to him that Saba’s Johan Cruyff Court too needed lights and should not be seen as different from the rest of the world because there is a lot of great talent on the island. He understood the need for the lights and we presented a project file to him.”

With the assistance of State Secretary Blokhuis and the Johan Cruyff Foundation, and a donation for the LED floodlights by Signify, formerly Philips Lighting, the lights were arranged. However, the right poles were lacking. The poles needed to be hurricane proof, and arranging them took some time. Then came the COVID-19 pandemic which caused further delay. Early February, the electrical works on the light masts were completed. Some more upgrading still has to take place to completely level the court. Commissioner Wilson said this would be done in a couple of months. “I was so pleased to see the lights go on. This will make it possible to play football and baseball in the evening hours.”

Will Johnson of the Man-O-War Ground Foundation elaborated on the history of what is now called the Johan Cruyff Court. It started with Lynne Johnson arranging soccer lessons for the young boys around 1999 on an open, cleared spot in Booby Hill. When the rental agreement in Booby Hill ended, then Commissioner Will Johnson spoke to then Minister Leo Chance about buying the piece of land, locally known as the Man-O-War Ground to create a new sports field. The Man-O-War Ground Foundation was created to collect funds to buy the property, with Will Johnson and Dave Levenstone as board members. With the support of donors and the Johan Cruyff Foundation, the land was purchased and the field constructed. “We are happy that many organizations and young people are making use of this field, and also proud that the Juliana Sports field is being put to good use. Long Live Saba and her people who never give up when pursuing a goal,” said Will Johnson, giving thanks to the Dutch Government for providing the necessary funds.

The Juliana Sports Field, in existence since the 1970ies, was upgraded over the past years with the financial assistance from then Antillean agencies Sede Antia and Reda Sosial. The Public Works Department gave the field a fresh layer of paint in December, and with funding from the Sports Prevention Accord, the Public Health and Sports budget and BES(t)4Kids the basketball rims were purchased. The new basketball facilities were put to good use on Saturday evening during the 3-on-3 tournament. Ten teams each with three persons aged 12 and up signed up for the competition.

At the start of the symbolic opening of the renovated sports field, the Saba Gems netball team showed their talents. This was the first time that the netball team played a game on this field, also in an effort to generate more interest for this sport which is relatively new to Saba. Saturday’s event was very successful and drew a large crowd. “We had almost full bleachers. The basketball players asked when we will again organize a tournament,” said project leader public health and sports Lauren Risley. “There is no one happier than this commissioner to see this upgrade materialized. We invest a lot in our youth,” said Rolando Wilson, who called on people to take good care of both sports fields. “They are our own. Value them.” The Juliana Sports Field and the Johan Cruyff Court are well-used by young and old. And, with the two fields equipped with lights, people can continue to play sports after sundown. 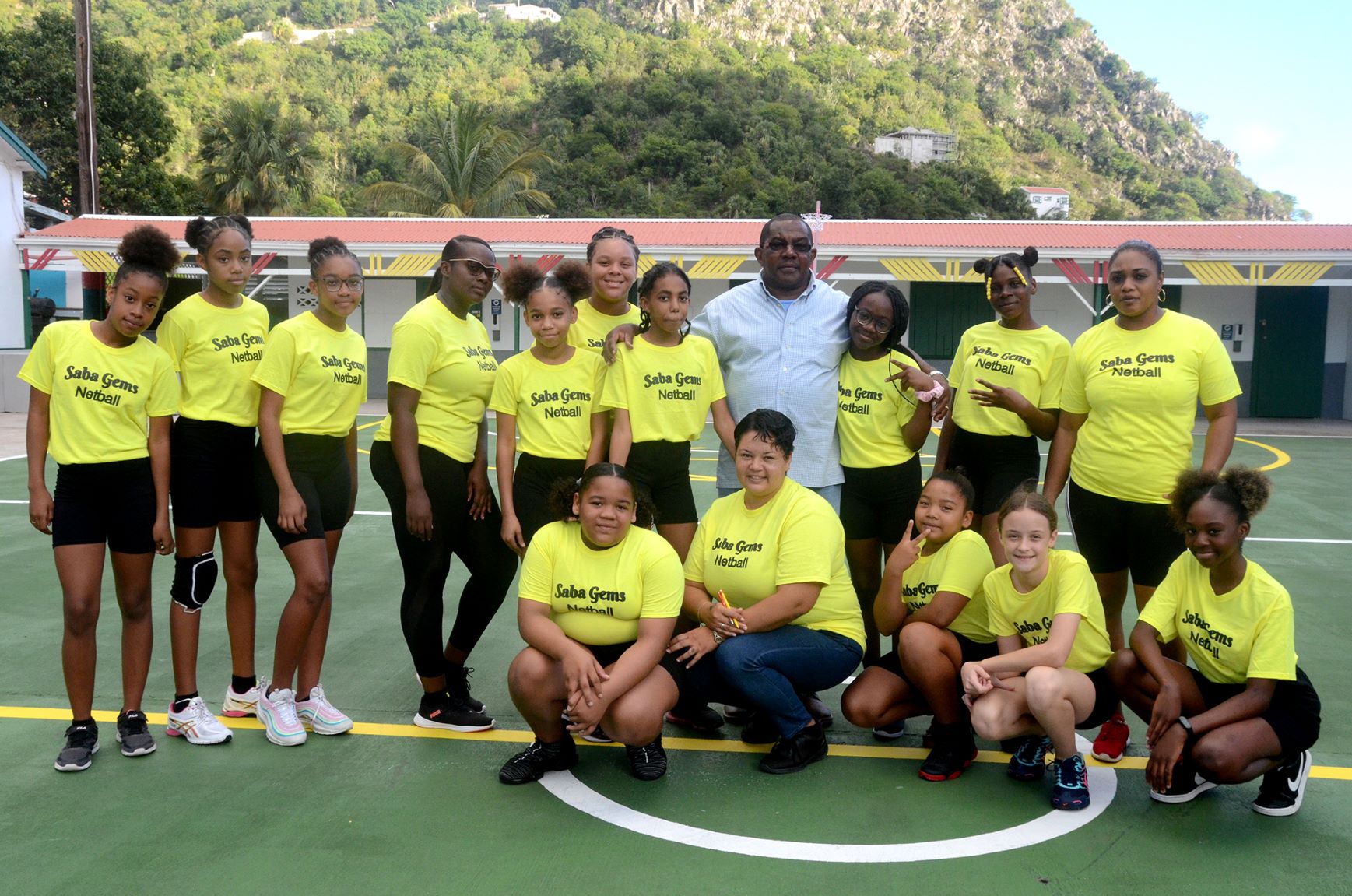 The Saba Gems netball team poses for a photo with Commissioner Rolando Wilson on the Juliana Sports Field. 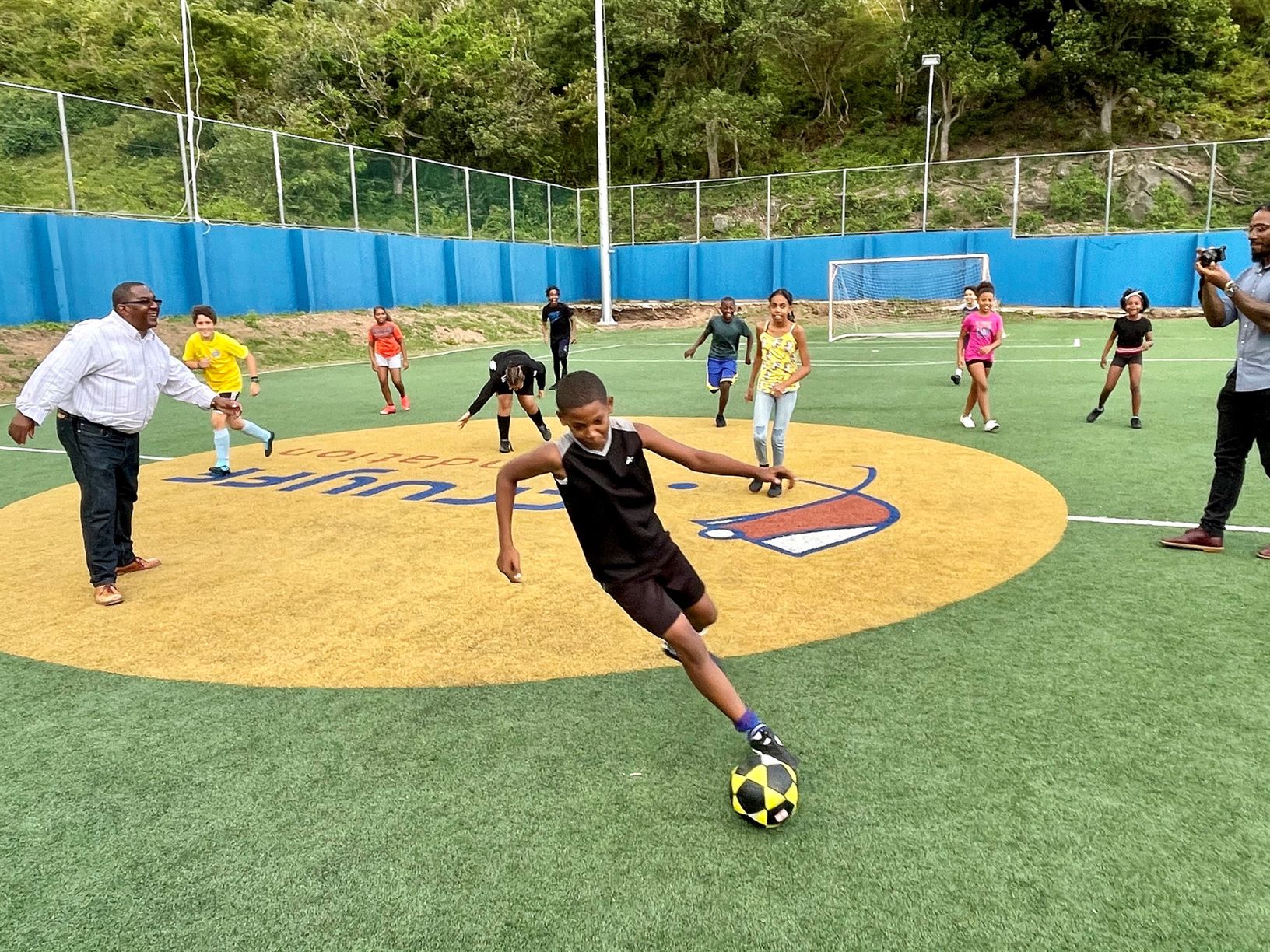 Rate this item
(0 votes)
Tweet
More in this category: « Money makes the world go ‘round - Funding, Finance and everything ‘not-so-nice’ Top 10 St. Martin books taken home from Philipsburg Jubilee Library »
back to top